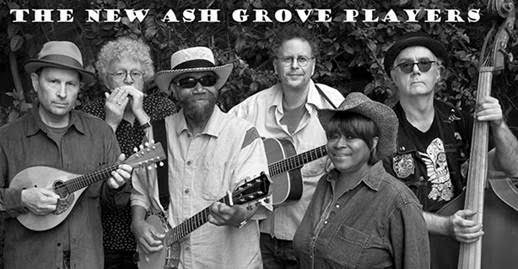 At The Grammy Museum

The New Ash Grove Players play authentic American roots music- folk, country, blues and bluegrass, that will uplift your spirit and stir your soul. For this performance they will be playing a set of songs from the historic Bristol Sessions, some of the first recordings of country music in 1927.  Taking inspiration from the many historic roots musicians that passed through the doors of the famed Ash Grove Music Club on Melrose Avenue in 1950s and 60s Los Angeles, these six talented and seasoned singers and musicians play a variety of instruments and take great traditional songs a nd give them new life. Featured are SS Jones (vocals, banjo and guitar), Claudia Lennear (vocals and background vocals),
Steve Moos (vocals, mandolin and guitar), Eric Ahlberg (vocals and bass), David Fertig (harmonica), and Jeff Landau (guitar). the band is an ongoing project of the Ash Grove Music Foundation. the new Ash Grove Players performed to rave reviews at the Pete Seeger Memorial Concert produced by the Ash Grove Music
Foundation in 2014. they recently performed their Lead Belly tribute show featuring SS Jones for the opening event of the exhibition about Lead Belly at the Grammy Museum in Los Angeles, CA. They performed songs from the historic Bristol Sessions at the  Grammy Museum’s exhibition commemorating the Bristol Sessions.